Beijing POP MART Cultural & Creative Co., Ltd., Limited is a leading player in China's pop culture and entertainment industry since 2010. Over the last decade the company has endeavored to scout talent, locate and acquire adaptable intellectual property, reach out to consumers, as well as foster and promote the culture of designer toys. With “To light up passion and bring joy” as its slogan, POP MART established a platform of integrated operations that covers the entire industry chain of designer toys. The brand concept of POP MART is to “To light up passion and bring joy.” To bring that idea closer to young designer toy enthusiasts, the company has held five successful international toy shows in Beijing and Shanghai. Attracting more than 100,000 visitors, those exhibitions were the largest in Asia and also filled the void in local markets. Through such events, Pop Market introduces the Chinese market to international brands and helps talented Chinese designers to reveal their original art on a larger stage, promoting a new enthusiasm to the development of the designer toy industry in China. As of December 31, 2019, POP MART had operated more than 114 retail stores and over 825 vending machines. They cover 57 cities across China as well as 21 overseas countries and regions including South Korea, Japan, Singapore and the US with an ever-increasing global presence. In the European market POP MART announced that it has inked an expansion agreement with its European partner Baby Watch. Together they will explore the European market, starting in France, and further improve globalized operations.POP MART has developed the PAQU app, the most professional social media platform intended for designer toy fans as an online space to form a community of their own. Now the app covers more than 540 brands and many designers write columns on the website. As a result, concepts like “reselling,” “custom” and “trade” have become the new buzzwords in the world of Chinese designer toys. POP MART has built, by far, the competitive edge with its designers, retail channels and industrial chain. The company has recruited famous designers like Kenny, Pucky and Kasing Lung, and launched many fan-favorites to secure a large number of loyal and high-quality customers. Meanwhile, POP MART works with world renowned brands to create pop culture products based on classic characters that appeal to the young. Moreover, POP MART attaches great importance to supporting the foundation of the designer toy market. To improve the training of homegrown talent, POP MART works with the Chinese Central Academy of Fine Arts to present seminars on designer toys and invites top designers to share their wisdom about the industry. The Tmall POP MART store online has achieved some initial success. By employing mini-games and applets to the online shopping experience it makes shopping even more entertaining. During the 2019 Double Eleven Shopping Festival, POP MART saw a total sale of 82.12 million yuan -- an increase of 295% year-on-year and ranking first among all Tmall toy stores. As POP MART continues to extend its reach, the company has also completed an industrial chain that consists of designers, factories, retail distribution and international toy shows. That way designers can focus on their work and the industry can truly prosper. 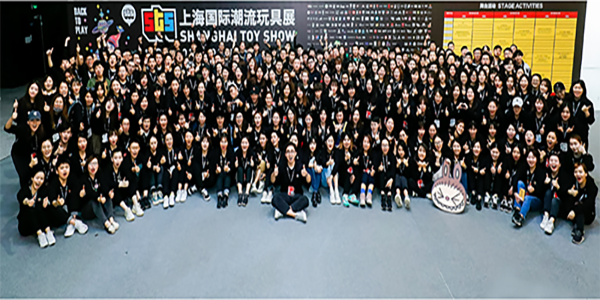